​Scroll Down For The Latest News. 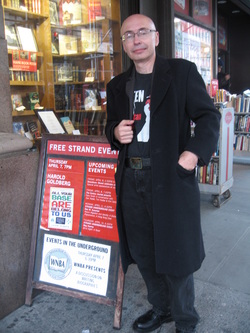 January 19, 2018 - I'm sorry I haven't been updating here as much has been going on. Please come to the our New York Game Awards on January 24th. Here's a link to tickets. Do say 'Hi' to me after the ceremony! It all benefits our scholarships and mentoring work! Here's a lot more info.

June 15, 2017 - It's time to get to work on two or three book proposals. I'll take much of the summer to get these into the proper shape, then choose the best one to send along to agents.

May 6, 2017 - For the New York Videogame Critics Circle, I've moved the group toward becoming a non-profit organization to offer more scholarships and mentoring. We are currently putting together a board and finding pro bono legal representation. It's a lot of work!

March 6, 2017 - I reviewed the amazing Legend of Zelda: Breath of the Wild for The Washington Post.

February 1, 2017 - After traveling to Osaka, Japan, I wrote about Resident Evil 7 for Playboy magazine and a separate piece for online.

January 20, 2017 - The New York Game Awards were a great success! The Daily Show offered up some amazing humor. We honored Richard Garriott, who made a great speech. The Abrons Playhouse was sold out. And we had 50,000 viewers online.

December 29, 2016 - Tickets for the New York Game Awards on 1/19 are now available. I founded the Awards six years ago. This year, they're in Manhattan at the Abrons Art Center Playhouse.

December 20, 2016 - My best video games of the year for Boys' Life magazine include Overwatch and The Last Guardian.

November 28, 2016 - I've been talking with a few top folks about writing a new book. Stay tuned for more news in the new year.

October 13, 2016 - I will travel to Montreal for the Festival of New Cinema to keynote and to participate in panels about Virtual Reality.

September 28, 2016 - I moderated two panels at the New York Games Conference, a keynote conversation on eSports and a fireside chat on VR, Pokemon Go and game trends with our New York Videogame Critics Circle.

September 27, 2016: For Playboy magazine, I wrote about Mafia III. The game takes place in New Orleans during the turbulent 1960s.

September 5, 2016: I worked on a new TV series for Reelz about serial killers and movies with a production company from Calgary. I'll be on two or three episodes - starting in February.

August 2, 2016: I went a little gonzo for a piece in Playboy which took me to Buenos Aires.

July 15, 2016: I worked with Viceland's World of Sports team on a show about eSports. It will appear next February.

June 15, 2016: I wrote about the Oculus Rift and Virtual Reality for The Washington Post. I had to take Dramamine.

May 19, 2016: One of the joys of my writing is working for Boys' Life as their so-called Games Guru. Here's a concise interview with Fumito Ueda on the The Last Guardian, almost 10 years in the making.

May 1, 2016: Here my story in Playboy magazine's May issue (and online) about this summer's most compelling scifi games.

April 18, 2016: Via the New York Videogame Critics Circle, I help teach kids about games and games jobs at the South Bronx's DreamYard School.

February 9, 2016 - The New York Game Awards were a success! We even had author Joshua Cohen and Grammy winner Wyclef Jean at the event.

January 30, 2016 - I have a story in newly redesigned Playboy magazine (and online) about language and linguistics in the game Far Cry Primal.

October 20, 2015 - I spent two hours being interviewed about games for a National Geographic special. It will air next Spring.

September, 29, 2015 - I began reviewing games for The Washington Post. This time, I took on Spike Lee's narrative contribution to NBA 2K16.

March 9, 2015, Two entertaining stories about the Powers TV series for Esquire, including a stirring interview with Brian Michael Bendis.

February 16, 2015, The NY Videogame Critics Circle I founded had its most successful Game Awards event ever with 135,000 viewers on Twitch.

January 1, 2015, I wrote about VR, 4KTV and electric cars in a long Future of Technology story for Playboy magazine.


December 7, 2014, When the great Ralph Baer passed, The New York Times quoted me in his obit. And I spoke about him for NPR.

December 5, 2014, I scripted the opening film for the The Game Awards along with Geoff Keighley. It was viewed by millions worldwide.

December 4, 2014, The League of Legends Experience book was funded, meeting its goal in 8 hours.

October 30, 2014, A theatrical version of My Life Among The Serial Killers begins its run in New York City.

May 26, 2014, The New York Times cover feature on Watch Dogs, the startling hacking game that was kept so long in development.

March 8, 2014, The Business Insider piece on Titanfall and the state of the game industry circa 2014.

April 27, 2013, For two years, I've advised the Tribeca Film Festival on games. Here, I moderate a sold-out panel on Beyond: Two Souls and interview Ellen Page, among others. 3.5 million views so far!

Here's some new commentary about games from my latest appearance on NPR's Morning Edition.

Here is a bit more info about All Your Base Are Belong to Us, How 50 Years of Videogames Conquered Pop Culture:

The excerpt in Vanity Fair

The profile in USA Today

The excerpt in Wired

The interview on NPR's Morning Edition

The interview about L.A. Noire on NPR's Morning Edition

The interview on BBC Radio 5

The interview in Salon

The story for Reuters

The excerpt in Fast Company

The excerpt about World of Warcraft in Boing Boing

The story about Rockstar's Sam Houser in Kotaku